So this is the very beginning of my (at least) weekly malta blog. As some of you already know the whole organization was pretty mixed up and when I climbed into the plane many of my questions where still unanswered. After a little delay we landed at the maltese airport and getting out the humid air hit me in a very nice and warming way. Step by step each of us was brought to our accommodations. I was the last one, so it was around midnight when I finally arrived at my apartment.

As I already expected the worst possible kind of accommodation I was kind of positively surprised by my room even though there were some things that are going to test my breaking point within the next weeks. So far I did not see anything of Malta as it was all dark and empty when we came. The next morning after maybe 3-4 hours of sleeping I wanted to check out the area (the „city“ is called Rabat) which was nice and a short trip, there live 11,000 people in Rabat and on Sunday the two stores are closed. I had no other choice then to take the next bus (after waiting for 40 minutes and walking around the city where the same men were greeting me from time to time while I went in circles ;)) or to die out of thirst.

I drove to Sliema which is right next to Valletta and so far the most modern city I can imagine here because everything else looks ancient, old and remarkably important. Fun fact: it took me one hour for a linear distance of 11 kilometers. Even though the forecast said it will be clouded the whole day, there was not even one cloud for the next 10 hours. At first I bought something to drink to solve my major problem (and stole some toilet paper in the restaurant as my room didnt have any) and then I walked around a bit and quickly decided to take a harbour tour at first to get an overview around the area. The tour was great and ever since then I am completely sunburned…who could have expected that 😀 coming of the boat I hopped on the next one: the ferry to Valletta.

Valletta is really pretty I had to hold myself back not to take a picture of every single pretty balcony or nice vintage shop sign. So I was wandering around and around until the sun completely damaged my skin. I went to a nice shadowy place and read a book for a little while until the ferry took me back to the other side and then the bus back to Rabat.

I got out some stops earlier and visited Mdina which is an incredibly interesting little city. Luckily I bought some bread and cheese when I saw it on a market stall because I completely forgot to eat something during the whole day (except for a chocolate brownie shake 😀 ). 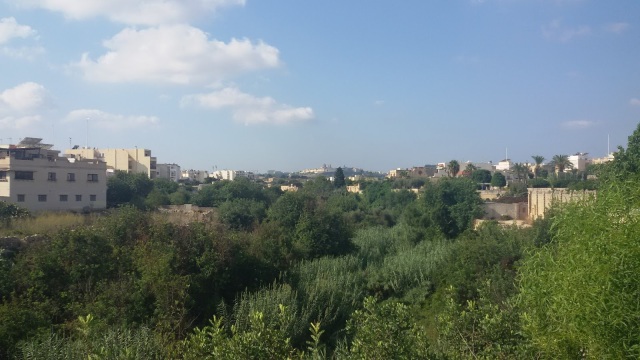