Zum Inhalt springen
We had an amazing long (but short) weekend. Friday evening started with a lecture I was attending. It was an event organized by the Maltese University but open to everyone. I registered for it even though I was a bit uncertain about whether I would be fit enough to go there after work as it requires quite a big part of my brain to listen to a lecture about teleportation and quantum mechanics and in English also regarding the fact that physics never really appealed to me.

Nevertheless I went there and I won’t regret it because the lecture was really cool. Interesting, funny and of course challenging and I have to admit I didn’t understand everything but still was inspired to use my brain a bit more for all kinds of foreign subjects. The prof that was giving the lecture was a cool fella ( do you say it like that? ) his name is Anton Zeilinger and he is in possession of the Isaac Newton Medal which seems to be a big thing.

After the lecture I went to the main street in Valletta where I met Esmee and Laura for a nightly visit to the street festival that was going on this weekend. The festival was not too interesting to us which is why we decided to have a drink and go home after that.


The next day was decided to be our beach day and we went to Golden Bay for three hours – which was enough to burn all the three of us in different intensities. After that we headed back home because we had a plan: Going to the ‚Chocolate, Sweets and Ice Cream market‘ in Smart City. Smart City is a newly built complex of a business township. The girls really liked it whereas I was a bit concerned because it seemed all so artificial and new. Anyways the place was interesting and the big fountain in the middle of the township with nice lights and music of course enjoyed all the advantages. The market itself unfortunately was not too big ( ok it has to be huge to fulfill all my dreams ) but still offered enough to make us all happy especially me because I always wanted to try fried ice cream ( one life-goal achieved ). I can tell you one fried ice cream scoop and you will be fed up for the next day but still – really tasty and refreshing. After eating enough we decided not to go partying this night – we were all pretty damaged and tired and went to bed early.

Which was perfect for me: I had big plans for the next day. So far I didn’t go hiking at all and I wanted to do it badly. Luckily I found a good website which helped me a lot with deciding what to do: My trail. So the plan was to drive to Dingli by bus and then hike from Dingli via the Dingli Cliffs to the Blue Grotto. I went to the bus early as my experience told me that busses usually arrive to early on Sundays. I arrived at the bus stop 20 minutes in advance but nevertheless I either missed the bus already or it simply didn’t come at all. 20 minutes after the bus should have arrived I took another bus to Rabat where I waited another 40 minutes until my bus finally arrived. In Dingli I was rewarded for all the waiting. Stepping out of the bus you immediately saw the sea from many hundred meters above sea-level. My hike began – the weather was perfect for my purpose. Windy and sunny – not too warm not too cold. The first thing you could see was the Dingli Radar Station which looked quite extraterrestrial. Further on I had a stunning view over the Dingli Cliffs themselves, passed a cute little church and had to climb a bit. Then I had like one and a half hours of a boring part wandering along empty streets with nothing really to see. After 4 hours in total I arrived at the Blue Grotto which was totally worth the whole walking. The view was stunning and I will definitely go there again and have a little boat ride into the actual Grotto. Again I recognized that seeing beautiful landscapes is the thing that satisfies me the most when travelling. Buildings are great and interesting but it is Mother Nature that makes me want to cry or scream in happiness.

After waiting for the bus to go back for another 40 minutes I met Lisette who was also visiting the Blue Grotto with her mum and grandma who were visiting her for the weekend. We could wait together and it was a lot less boring to go back to Valletta. My plan was to check out Vittoriosa a little more. I didn’t really have it on my screen until the day before when we passed it by bus and it looked so beautiful. Vittoriosa ( Birgu ) is one of the Three Cities next to Valletta, all harbours and as far as I understood it it was Maltas capital before Valletta. Anyways it is a great place to visit or to go for dinner. Back home I went to the Kebab place with Esmee and filled my stomach with a tasty mixed wrap.

On Monday ( 21st of September ) Malta celebrated a very important day. The Independence Day. In 1964 Malta achieved Independence from the UK which obviously is a big thing for Maltese and needs to be celebrated. For us it meant another day off to explore Malta. I went to Ghadira to go for some more hiking. Sadly I didn’t feel so fit so I ended up going back after maximum 2 hours of walking. Since Saturday evening the wind was pretty strong and it started to bother my ears and eyes even more when I went to the beach in Mellieha and sand was blowing around all the time. This was why I returned back home at 4pm which is quite early for me. For half an hour I enjoyed the flat just for me and then the other girls joined me one after the other. After lying around for 3 or 4 hours I leastwise motivated myself to go running which was good after all the ice cream and Pizza I had that day. 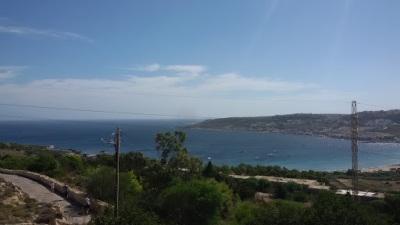 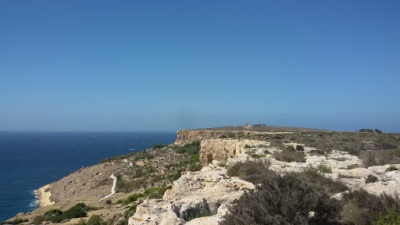