As there might be some more non-german speaking people reading my blogpost about the RuLu 2014 I try to write it in English. Sorry in advance for my shitty style 😉

For those who don’t know the story: Like a month ago I was googling around and found a ruby google group. I started reading through the posts and found an article which said that I can win a ticket to the RuLu conference in Lyon (http://rulu.eu/). Ok, I thought. why not. I had to answer a not to easy question and send the solution to an email address. As I do with most things after submitting my answer I immediately forgot about it. The next day one of my colleagues sent me a message in our chat client “Nina: you won” I was like “Cool, but what?” as he was in that very same google group he read about me winning the ticket. This was a really lucky day. The people that know me a little longer are quite aware that I usually have a quite good hand in lotteries of all kinds except for those were you really can win money. I was in such a good mood after I found out about that and the many cats gifs my colleagues sent that day did the rest.
As Conny and I planned to go for some travelling anyway I straight away asked her if she wants to join me for a little holiday. She wanted and thats how it got real. We planned to go to Marseille before the conference and prepared our trip. Going by train and staying at airbnb-hosts it did not get too expensive.

Some weeks and some stressful time later I finally hopped into the train in Berlin Main Station Conny joined me later as she came from Tübingen and everything worked even though the strikes in France were already going.We had a great time in Marseille which I will include in another blog post about all the travelling we did, and headed off to Lyon some days later. So the conference. Actually I promised myself to prepare for the talks because there were some topics I didn’t even know what they are talking about. But you know how these things work….Thanks to Murphy’s Law the first conference day was the first completely sunny and warm day in Lyon…good for Conny. At least while walking 30 minutes to the Cafe Theatre Odeon at 8 am I had a glimpse on the good weather. I fulfilled my duty as a punctual german and with some 10 other people stood in front of the theatre a little too early. Soon we could go in and receive our RuLu tickets and eat some breakfast (of course it was Croissants and Pain au Chocolate). We were not so many but that´s a good thing to get to know each other a little better. The first talk then was somewhat discouraging for me it was a talk on how Strings are implemented in C. I survived it and was quite hopeful that from now on it could only get a little easier. And it was. There were many interesting talks on how to speed up rails applications, RubyMotion (which teased me a lot all the more they are working on the RubyMotion for Android version) and some coding related talks like which music to listen to when you want to stay focused on your programming. The lunch was really nice as well even though I am not quite sure I accidentally ate some entrails…

The next day was filled with a little less talks with some of them being kind of lightning talks. The future of Ruby played a bigger role in many talks and there was a discussion about it in the afternoon. There were talks on design processes, being aware of all the other programming languages that can sometimes be more effective with special problems and so on. For me the conference was a really great experience. Of course I didn’t unterstand everything as I am kind of like a bloody beginner but still I would recommend it to everyone being new to ruby or ruby on rails. It was really motivating to get a glimpse of all the topics that will be more interesting for me in the future. I got to know great people could talk to programmers for 2 whole days. Also the the ruby community seems to be a really special and welcoming community. Even though I (unfortunately) was one of only a few few women I felt comfortable going there on my own and not to forget about the really great partying, drinking, watching soccer together…. Did you ever sing karaoke with some programmers? You should! 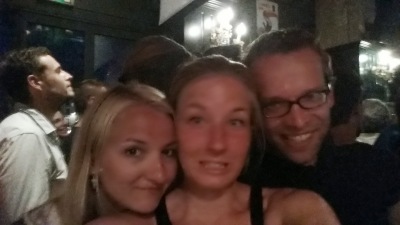